I can’t stop thinking about the amazing weekend I had with 3 of my friends, Stephanie, Heidi and Petra. We loaded up our horses, and took a drive up to Meadow View Campground near Doyle California. We met up at Hallelujah Junction on the way because not everyone was sure exactly where we were going. I was familiar with the location as we would be driving past my old house about a mile up the road. I lived there about 10 years after hiring a contractor to have the house built. I sure do miss that house, the view, its new-ness. My old 70’s house sometimes seems dark and dreary in comparison.

Our little convoy of trucks with campers and horse trailers in tow, made the slow ascent up the hill, towards the meadows and the campground. A little-known location, except for locals, the camping is free, and if that wasn’t enough, there is a huge bonus in 6 well-constructed horse corrals for the horses. We made our way up the hill then traveled along the edge of the meadow to find to our surprise there were dozens of cars there and what appeared to be hundreds of people! Yikes! They were all dressed in fatigues and most were teenagers. Maybe this won’t be a fun weekend!!

They had several cars parked in the open area that was designated for horses. There was also one other truck and trailer with two horses already there. Because its free, the space is first come first serve. We asked the leaders of the large group (turned out they were Navy Sea Cadets, doing survival training) if we could get the cars moved that were in the horse area. Only one of the cars could be moved, because the occupants were out on maneuvers at the lake and would not be back till the end of the day. After the car was moved, we managed to get around the remaining cars with our rigs, almost getting stuck in the mud in the process. We settled in, got the horses unloaded and set up camp.

The Cadets did a lot of military style yelling, marching and general racket. Surprisingly, it didn’t really bother us. Everyone in the group was very nice and accommodating, and we got along with them fine. We wanted to hear about their mission, and learn the what and why that brought them to the same location as us this weekend. They explained they are one step up from ROTC for teenagers age 11 through to high school graduation. Many of them end up going into the Navy or Marines after high school. The kids are learning discipline, love of the outdoors and some survival skills. We talked to some of the kids too and they seemed to be having fun, while working hard at the same time. I found it refreshing. The horses were absolutely fascinated with the marching and chanting.  It was fun to watch them.

Selfie on the top

Cant resist laying down in the meadow

lunch in the meadow

Red was a little concerned about the cows

Out for a ride at Meadow View

Headed back to camp 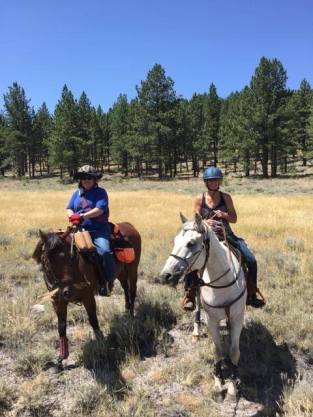 We saddled up and took off to the north for our first ride. I had been in the area riding before, but it was 15+ years ago. I headed for an old trail I once knew, but found it to be quite overgrown. We headed in to the woods anyway, and over the ridge, losing all traces of the trail. We found a beautiful meadow and decided that was a good place to stop for lunch consisting of crackers, cheese and salami.

Three of the horses were seasoned trail steeds, one was a dressage pony, spending most of her time in an arena with perfect footing and fences to keep her in and safe. She was a beautiful Connemara Pony. Her rider Heidi is an accomplished horsewoman, and we were patient when she didn’t think it was safe to walk in a wet swampy area of the meadow. Heidi was so patient, giving her time to figure out that she wasn’t going to get stuck in the mud. Pretty soon, she just walked on through the mud following her riders lead. She also was pretty concerned about bees. She did not like them one bit. Because we rode through meadows and wildflowers quite a bit, she also hesitated when she heard that buzzing. Again, Heidi was steady and reassuring, helping her through the difficult moments.

It was refreshing to watch Heidi work with her, so many riders can get to battling with their horse. When that happens, everyone ends up losing. There are no winners, even if you manage to force the horse to do what you want. It works so much better to give them time to realize they are not going to die!

The rest of the weekend was uneventful, Petra made tacos for dinner, and I made breakfast Sunday morning with my own variation of Starbucks Spinach Feta Wrap. After breakfast, one more ride in the opposite direction, this time encountering 2 herds of cows, and identifying the flowers and shrubs on the way if we could. We saw Hemlock, yarrow, owl’s clover, buckwheat, lupine, three colors of paintbrush, cobweb thistle, miner’s lettuce, elderberry, and many others that I could not identify and possibly some I just don’t remember. I surprised myself in knowing some without thinking.
We all seemed to be interested in the same things. It was so nice to be with like-minded people! Nobody seemed out of place.

After returning from our morning ride, we had lunch and loaded up to head home, saying goodbye to our newfound Sea Cadet friends. Creeping back down the steep grade, once we finally made it to the highway I was only 30 minutes from home. I still had time to clean out the camper and chill for a little while before dinner.

So, get out of the house! You can look for campgrounds at the Recreation.gov website. Reservations and payments for some facilities are taken on line. Here’s the link https://www.recreation.gov/
Recreation.gov is your one-stop shop for trip planning and reservations brought to you by 12 federal Participating Partners. You can find the outing you are dreaming about – camping, day use, museums, wilderness areas, local attractions, educational facilities and more!
Go enjoy the scenery in this great land. Its soothing to the heart and mind. Gives me more purpose. I love that.